A true event from my grandmother's childhood told by Doreen Tamminga

The sky was growing dark. The windmill raised its familiar bulk near the dike, holding back the night, but already its blades had vanished with the fading light. Shadows filled the space between the tall brick houses as Johanna ran down the street. Her heart beat faster as her skinny white legs flashed along, one sock up and one sock down. Here a newspaper was delivered, and there another. Here one—step, step, up the stoep—and there one.

Faster! Faster! Her heart kept time with her feet as Johanna sped along the cobblestones to the end of the lighted street. Hurry! Hurry! Always on towards the grey lane at the edge of town.

Clank! A newspaper dropped through a mail slot. Clank! Clank! There went two more, and Johanna had reached the end of the street. A dozen newspapers remained in her bag, but their route lay beyond the warm circles of gas light cast by the streetlamps. Johanna slowed to a walk and then stopped, breathing hard, as she reached the last streetlamp. She had raced the dark but the dark had won.

The grey lane ahead followed the dike before crossing the canal to disappear into the countryside beyond. Johanna straightened as her breathing slowed and took one step towards the dike. Quick! she told herself. Just run! Along the dike, down the lane, and then you’ll be back by the streetlamps again—home!

And she did. But her fear ran faster, snapping at her heels and surging up in her chest. A newspaper here—step, step, clank!—down the dark lane to the next house, and a newspaper there! Again and again until, at last, the warm lights of town flickered through the trees that lined the lane.

The door to her own house banged open as Johanna burst in. What a relief to be home!

“Ach, kind! You are all hot and out of breath!” Mama fretted from the stove where she was frying meatballs. She didn’t like her daughter delivering papers on these dark winter afternoons anymore than Johanna did, but they needed the money.

“Set the table and wipe Jaap‘s nose,” Mama said. Johanna pulled her worn leather shoes from her feet, and a handkerchief from her pocket. Her cold fingers fumbled with the buttons on her wool coat. It was good to be in the warm house with its welcome light and the good smell of fried onions.

But bedtime and morning came too soon. Then it was school and back to the newspaper route. Every day it became harder to run down that country lane. No matter how Johanna hurried home from school to deliver her newspapers in the fading light, the sun always set and the dark was waiting for her across the canal. Every day she waited longer at that last streetlamp. 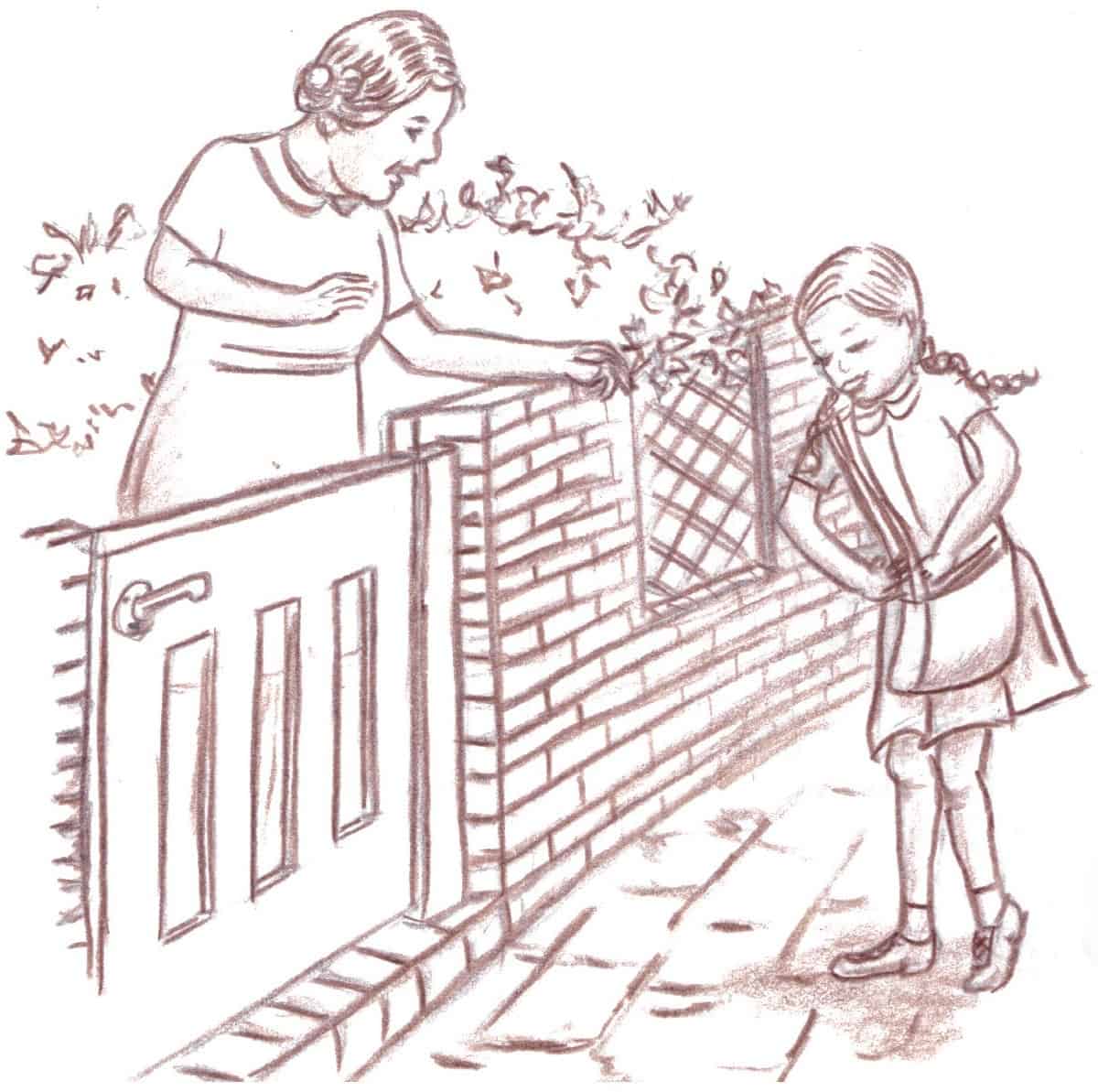 In the summer, the country lane lay ahead, wide and welcoming. Then the warm smell of earth and hum of insects rose from the grass, making the long summer days seem longer. By September, the lane had become a golden path, a place of beauty in the setting sun; but not now.  These days the long nights of winter swallowed up the lane with their inky darkness, a darkness like the fear inside. Each day it was the same, except for the fear—that grew larger.

But not today…today was Sunday!

“Wake up, Corrie!” she whispered happily in the grey light of morning. With a big tug she threw off the blankets that covered her and her sister. “It’s Sunday!” she whispered again loudly as she sprang out of bed.

Corrie‘s eyes opened and she shivered in the cold attic room. In a moment she had sprung from bed and the two girls were getting dressed. Their family was not a church-going family, but in the afternoon, since there were no newspapers to deliver, Mama let the two girls go to the Sunday School at the nearby church.

“Why not?” Papa had said. It was free and the girls could walk there themselves.

It was warm in the drafty church that afternoon. Not as warm as the kitchen at home, perhaps, with its big black stove, but warm with voices and eyes that smiled. Warm with stories and lessons about God—not just a God, a far-off Creator-God, but a Father-God, a near-God, One-who-could-walk-beside-you-and-hear-your-fears God. As Johanna listened, her heart yearned for such a God. Yes, He was real! She was sure. These teachers, they believed what they were teaching; she could tell. And if it was true…why then…then…

Johanna had much to think about as she walked back to the home where Mama was scolding Papa about the money he had spent on tobacco.

“Just how are we going to pay the grocer?!” Mama fretted, even as she wrapped up a few potatoes and onions for the widow down the street. The girls closed the door quietly as they entered, hanging their coats on the hooks.

It was Monday. School was over and Johanna had already delivered the first half of her newspapers. The newspaper bag was clutched tightly in her hands, and her heart beat faster than ever as her thoughts raced ahead to the lane at the edge of town. She wasn’t there yet, but already in her mind, she could see the empty darkness with nothing, nothing but the sky overhead… Already the fear rose inside, choking her breath, and as she hurried from house to house, her heart rose in a cry—a cry to the God-who-hears-and-cares; a cry to the God-who-is-always-near.

Up the steps, through the mailslot. Again and again. Two more newspapers and Johanna was at the end of the street. But what was that  sitting patiently under the last streetlamp? It was so big and so dark! It must be a dog! And dogs were almost as bad as the dark…

Johanna had never seen this dog on her newspaper route before. Where had he come from? Johanna slowed and began to walk in a wide arc around the streetlamp. She wasn’t thinking about the dark lane anymore, now she was thinking about that dog. He was big! And if he jumped at her…! 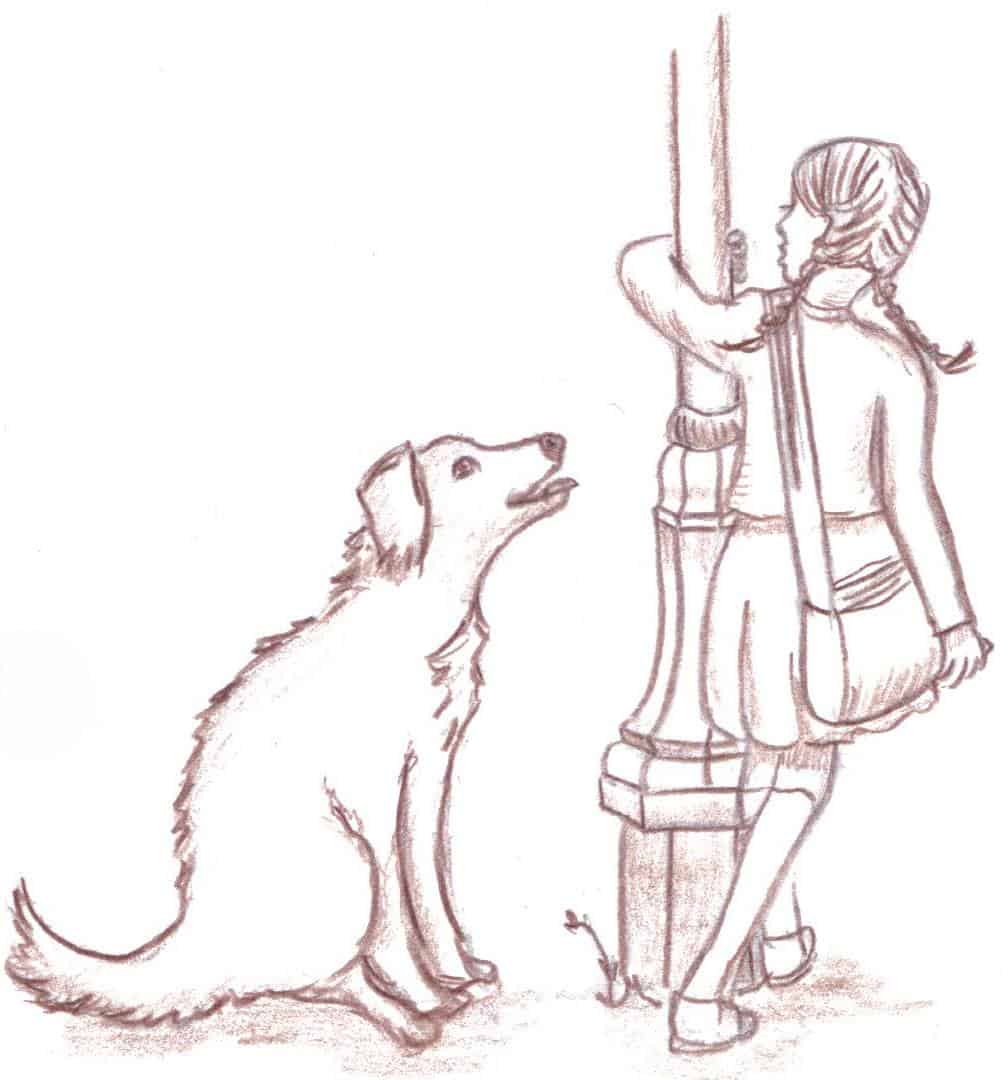 But he didn’t jump. His tail swished once or twice along the ground in a friendly wag, and then he got up, and walked over to her. Johanna scurried back a few steps but the dog was in no hurry. He didn’t pounce playfully after her, as dogs often do. He simply pushed his nose up against her sleeve, the way a dog welcomes his master! And then he turned, and began walking down the dark lane…

Johanna watched in surprise. Maybe he lives down that lane! she thought. Maybe he strayed from one of those farms, and I just never saw him before in the dark!

She waited a moment to let him leave, but he had paused and was looking back at her, waiting for her, it seemed.

Johanna shivered. It was dark and cold and supper would be waiting. She must go on. Slowly she took a few steps forward, and as the dog began to walk again, she followed—to the first house as she folded the paper and delivered it. And to the second. Which home was the dog’s? she wondered. But he went on with her, all the way down that dark lane, all the way to the edge of town and its warm gas lamps. There he stopped as she hurried off home. Just once, she glanced back, but the dog had disappeared into the night.

When school was out the next day, Johanna hurried off as usual to deliver her newspapers. But this time as she drew near the edge of town, she couldn’t help peering ahead to the last streetlamp, to where the dog had been sitting yesterday. Her heart jumped with surprise. For something black was sitting there again! Just like yesterday! This time Johanna didn’t circle away from the dog, but came forward slowly, and spoke softly to him.

“Hi there, big boy. What are you waiting for?” And again, the dog rose to greet her and then set off down the path as though he had been waiting for her.

The next day was the same. And the next.

Now Johanna didn’t hold her breath as she came to the edge of town. She didn’t close her eyes as if jumping into the canal for a swim. There was no plunging down the dark lane with the blood pounding in her ears. No, instead there were only the steady footfalls from her hard leather shoes and the soft padding of the big dog beside her. Johanna could walk bravely through the dark lane for there was the warm presence of her new companion. And Johanna knew. She knew it was an answer to her prayer. She had cried out to the God-who-hears and He had sent her a protector.

“Move to Friesland??!!” Johanna echoed Mama’s words. Together they were folding the laundry. Papa was reading the newspaper by the stove. Shake, smooth, fold. Steadily the carefully stacked pile of laundry grew. “Move to Friesland?” Johanna said again. “To Tante Helena and Ome Johannes’ house?”

“Yes.” Mama said no more but her hands continued the rhythm as the silence grew. Shake, smooth, fold, stack. “Yes,” Mama said again. “It will be better for you.” She looked at Johanna then, and Johanna saw the pain in her eyes. No, Mama didn’t want her to go, but it was best—for the family, for her.

“Yes,” Papa added loudly setting down the newspaper and walking over to the table. “Pieter can deliver your newspaper route, and you can work for Tante Helena.”

Leave the newspaper route…? Johanna thought. That would not be so bad… But then she thought of the Sunday School… During supper, the questions started coming. “How would she get to Friesland? When was she going? What school would she go to there? Was there a Sunday School?”

And in bed that night, Johanna and Corrie whispered some more about it. Whispered and cried. They couldn’t bear to be parted. “But one day I’ll come back,” Johanna promised. “Or you can come to Friesland. We’ll have our own house and we can live there together.”

“Yes,” Johanna agreed. “And not just a Sunday School class, but real church services!” She smiled a little. When the church bells rang through the streets on Sunday mornings, she wouldn’t be washing dishes or still sitting down for breakfast, but she would be walking down the street with the other families on their way to church. And then, there inside the church…! There would be more of that Truth, those lessons about the God-who-hears, those psalms of praise, and prayers of need.

Johanna rolled over in bed to look at her sister. “I was so scared and then, suddenly, there was a dog there waiting for me. And he came with me every day until the spring, when it wasn’t dark anymore!”

Corrie smiled. “That was kind of a funny answer to prayer, wasn’t it?” she said. “But a good one,” she quickly added. “It was like a friend to protect you every day.”

“Yes,” Johanna smiled. “It was.” She pulled the wool blanket close under her chin, slipping the threadbare sheet between. No, maybe it would not be so bad to move to Friesland. It would be best, Mama thought. And she and Corrie would write letters, and she would pack her Bible from Sunday School.

Slowly Johanna’s eyes slid shut. And the God-who-heard, she thought, He would be there in Friesland too…